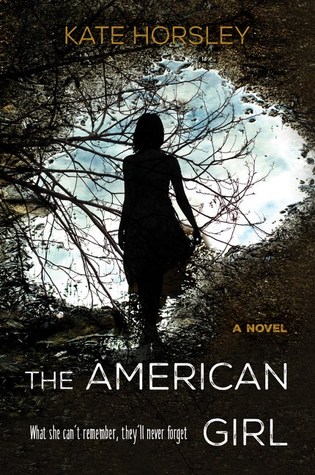 On a quiet summer morning seventeen-year-old American exchange student Quinn Perkins stumbles out of the woods near the small French town of St. Roch, barefoot, bloodied, and unable to say what has happened to her.

Quinn's appearance creates a stir, especially since her host family, the Blavettes, has mysteriously disappeared. Now the media, and everyone in the idyllic village, are wondering if the American girl has anything to do with the missing family.

A Boston reporter named Molly Swift travels to St. Roch, prepared to do anything to learn the truth and score the ultimate scoop. After Quinn is arrested and a trial by media ensues, she finds an unlikely ally in the young journalist. Molly unravels the disturbing secrets of the town's past in an effort to clear Quinn's name, but even she is forced to admit that the American girl makes a compelling suspect.


I haven't read a mystery book in a little while that had a large amount of suspense so I figured I would give The American Girl a shot after the synopsis left me with a lot of questions on what is exactly going on.   After reading the first few chapters I had even more and more questions on what was going on and who was Quinn really.   The beginning of the book is very captivating and leaves you with a lot of questions.   By reading the first 50 pages I knew this was a book that I wasn't going to be able to put down for to long.

The author did an amazing job developing the suspense in the book.  I felt like I didn't want to stop reading the book at night because I just wanted to know what really happened to Quinn and what happened to her host family the Blavettes.

Quinn was a very complex character that the author developed.  She was originally presented I felt as a little sheltered and more innocent then she really was.  I felt like the author set her up as someone who just lost their mother and felt abandoned in her life.  As we read further in the book I felt like my whole opinion of Quinn changed and I completely misjudged her.  Quinn was my favorite character in the book.  I think her blog entries make her the most interesting, she is completely deceptive and like two different people throughout the story.  I do question if she really ever lost her memory and feel I could make a big argument that she knew what was going on the whole time.

The author also did a great job describing the scenes of what was going on around the characters.  The book is told through the eyes of Molly in the present and some blog entries of Quinn in the past.  The author uses a lot of descriptions of the scenes to bring the characters to life.   Once Quinn begins to spin out of control the scenes become so elaborate and I felt like they were spinning along right with her.

I liked Molly as a character, but I sort of got over her about halfway through the book.  She just couldn't keep it together and wasn't really filling in all of the gaps that I wanted her to do.  The blog entries from Quinn really made the book for me.  Molly seemed like she was trying at some points and at other points she was just not putting things together for the reader.  I felt like she just wasn't good at investigating.

Things I didn't love about the book were there are portions of the story that I felt like just dragged on.  I had the urge to skip pages while reading to figure out what was going to happen next.  The author left a lot of clues and built up a lot of suspense in her writing, but as a reader I wanted to know what happened sooner.   I feel like if I get to the point of wanting to skip over pages the story is dragging on to long.

I would suggest this as a weekend read or a great book to bring along on vacation.  I felt like I needed longer reading periods to sit down and read this book because there was just so much going on and I wanted to know what was going to happen next.

I was received a copy of this book from The Fantastic Flying Book Club for the purpose of providing an honest review. This does not affect my opinion of the book or the content of my review.

I'm a writer living in Manchester with my artist husband, John, a small person called Violet and a ghost called Ron.

The Monster’s Wife , my first novel, was a rewriting of Frankenstein told from the perspective of the girl Victor Frankenstein transformed into a Bride for his monster. I wrote most of the novel on the tiny island in the Scottish Orkneys on which it's set and it was shortlisted for the Scottish First Book of the Year Award.

My second novel, The American Girl , tells the story of and American exchange student who stumbles out of the woods near the small French town of St. Roch, barefoot, bloodied, and unable to say what has happened to her. I also wrote this partly on the hoof, in the various locations in the South of France mentioned in the book.

Before I became a writer, I had a lot of jobs, from babysitter and box-assembler to librarian and teacher. I teach photography with my husband and travel as often as possible, often wearing an elaborate disguise.