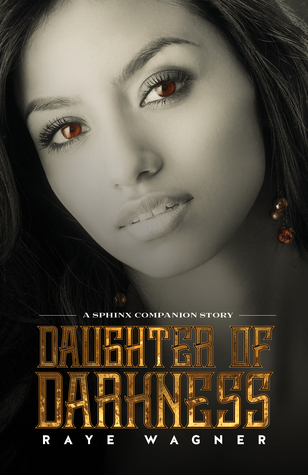 Daughter of Darkness by Raye Wagner


Format: ebook/ 90 pages
How I got it: The author for exchange for an honest review
Buy it: Amazon
My rating: 5/5

Who will be her light in the dark?Dahlia knows her value… it’s less than nothing. As a daughter of the goddess Eris, discord and wanting are her only companions. While she craves love and friendship — or even just a sense of belonging — those are the very things her presence destroys.Unless . . . One day, a mysterious stranger rescues her from a fight and offers her the unattainable: a safe haven with other demigods. But Dahlia fears a new residence can only be a temporary reprieve. It can’t end well — not for her or the others.After all, it’s impossible to change who she is.Daughter of Darkness takes place in the same world as The Sphinx series, but it is a companion story (12,000 words) and can be enjoyed independently.

I love the Sphinx series and Raye Wagner’s writing so I was excited to read Daughter of Darkness.

This is a companion book to the Sphinx series and is specifically about Dahlia who is the daughter of Eris.  Dahlia is in the other books of the series and does become more prevalent as the series is continuing.  I loved that the author was able to take one character and bring her to life a lot more than the series allows since it follows the Sphinx and her interactions with the Gods/Demigods.

I loved this book!! The emotions that Raye pulled through this book where by far amazing and kept my attention reading the entire time.  I felt connected to Dahlia and just wanted her to succeed.  We first meet Dahlia as she is fighting with some school mates for the 100th time and Xan saves her.  Also, I love that we got more of Xan in this book.

Dahlia has had a very rough upbringing and has very low self-confidence.  She doesn’t know her worth or what she is good at until she meets Xan.  If I didn’t love Xan already you will fall more for him in this book because he teaches Dahlia how to be confident in herself.   I loved his ability to show her that she is worth a lot.

The author does a great job with pacing in this book as well as giving enough background that you know exactly what is going on.  I again love all the descriptions that we are getting for the setting and the characters.

The story is very short, but does help explain how Dahlia became the Dahlia of today.  I loved every part of this book.  I would say you could probably read this as a novel in between book 2 and 3 to get more about Dahlia and even as a standalone it would make sense as not much is brought up that isn’t directly explained in the book.  I can’t wait for the next book in this series or even another companion book!!

I would suggest this as a book to read in one sitting.  I read it in one night and just couldn’t put it down.  Also, I highly recommend this series to anyone who enjoys fantasy as well as mythology! 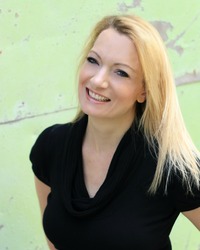 Raye Wagner grew up in Seattle, the second of eight children, and learned to escape chaos through the pages of fiction. As a youth, she read the likes of David Eddings, Leon Uris, and Jane Austen. Inspired by a fictional character, Raye pursued a career in nursing, thinking to help the world one patient at a time.
One summer afternoon, when her then young children were playing in the pool, a plot dropped into her head, and she started writing.
She enjoys baking, puzzles, Tae Kwon Do, and the sound of waves lapping at the sand. She lives with her husband and three children in Middle Tennessee.
Origin of the Sphinx, a novella detailing the story leading up to the creation of the mythological creature, is her first publication. It is the beginning of the Sphinx series.
Curse of the Sphinx, the first book in the series, is completed, and set to be released in August 2015.