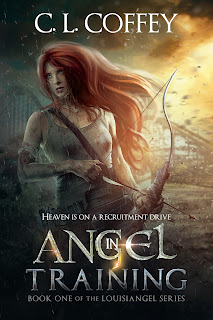 After a night out turns fatal, a misunderstanding with the Archangel Michael presents Angel with a chance at Eternal Life: the opportunity to earn her wings and one day become an archangel herself.
Angel is given the task of protecting her charge, trainee detective, Joshua Walsh. There's no denying the attraction between Angel and Joshua, only Michael has pretty strict rules: no drinking, no drugs, and certainly no relationships with humans. Thankfully, she's got other things to deal with, like trying to convince Joshua New Orleans has a serial killer who is preying on other angel potentials like herself.
Angel must quickly learn that when keeping someone safe, doing the right thing is not always the easiest, especially when you've got an archangel looking over your shoulder.

Check out this Excerpt:
As if he sensed me watching him, Joshua looked up. My breath caught in my throat. If I thought Michael was gorgeous, it didn’t even begin to compare to this guy. Whereas Michael looked like he had been sculptured into perfection, Joshua was gorgeous because of the slight imperfections. His nose was ever so slightly crooked and he had a small scar just above his right eyebrow. Even his five o’clock shadow made him look a little rugged. I pulled my eyes away from him just long enough to stare at the ceiling and mutter, “I hate you a tiny little bit right now.”
When I dropped my gaze back to him, I discovered he was still looking at me through his long black eyelashes. His eyes were such a clear blue; it was like staring at the sky outside. His hair was as dark as his lashes, looking almost like it had a blue hint to it in the dim light. Stray locks of his hair that were no longer brushed to the side, were dangling in his eyes.
As one of his eyebrows arched up questioningly, it dawned on me that I was just standing there, gawking. I tucked my hair nervously behind my ear and hurried over. “Joshua Walsh?”
“Who wants to know?” he asked, looking up at me through hooded eyes.
“I’m Angel,” I offered. With one look he was throwing me off balance and it was really disconcerting. I’m not scared of going up to guys and talking to them, but this one had the geese back in my stomach.
“Yes. Yes you are,” he agreed, smiling. He pointed to the seat opposite.
I slid into the seat, only just making it graceful before my legs gave out on me. “No,” I told him, clearing my throat. “My name is Angel.” I frowned. “Although I suppose you’re technically correct.”
“It may be the beer, but you’re not making any sense.” He picked up his bottle and used it to point at me, winking as he did so. “It’s alright though, because you’re hot.”
I tucked my hair back behind my ear again, then, conscious that I had just done that, dropped my hands into my lap. Of course he noticed and smirked. I took the opportunity to clear my throat again. “Let me start again. You’re hot.” My eyes bulged as I realized what I had said. “No, I mean, I’m hot.”
I froze, mortified. As he continued smirking, I did what any self-respecting woman would do. I let my head drop to the table with a bang which was sure to leave a red mark. I would have gladly had the floor open and swallow me whole, even if at this point, there was a strong possibility there would be something under there.
“You know, I’m going to be honest,” he drawled. I raised my head just enough to look at him. “That’s the most entertaining pick up line I’ve ever had.”
My head shot upright as I began furiously shaking it. “I’m not hitting on you!”
He leaned forward. “It’s alright,” he told me in a stage whisper. “Because you’re hot. And so is that accent. Where are you from?”
“England,” I admitted, knowing full well my face was quickly turning an interesting shade of pink. “But I live in New Orleans now.”
He leaned forward again, this time propping his head up with his hand, and smiled. “I think I could listen to you talk all day.”
“I think you should probably go to bed and get some sleep,” I retorted.
The smirk was back. “You going to come back with me?”
“No,” I told him, trying my hardest to appear unaffected by his suggestion.
The smirk grew into a grin. “You’re totally lying,” he informed me. “You think I’m hot.”
“I think you’re drunk,” I informed him. And hot, yes. But there was no way I was going to tell him. Again.
He shrugged, the grin never slipping from his face. “But that doesn’t stop you from thinking I’m hot. I can be both.”
“Cocky much?” I asked him, rolling my eyes.
He pulled himself back and allowed himself to lean back into his seat. “Well, if you’re not hitting on me, why are you here?”
“Because apparently, somebody upstairs has got a twisted sense of humor,” I told him, the statement verging on a growl. I took a deep breath and forced the growing resentment from me. “I’m going to start over. My name is Angelina, or Angel, but I am also your Guardian Angel.”
Joshua rose to his feet, the motion scattering the empty bottles across the table. “And that’s where your chat up line failed, darlin’, because there are no such things as angels.” He downed what was left in the bottle and stalked over to the bar. 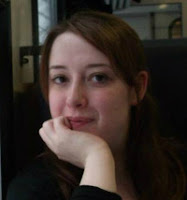 About the Author
Cheryl works in an office by day. By night she leads a (not-so) secret life DJing, and throughout it all, is constantly scribbling away as the plot bunnies demand constant attention.
Her first novel was written when she should have been revising for her exams. While it is unlikely to ever see the light of day, it was the start of long relationship with the evil plot bunnies of doom.A need to do more than just one subject led her to the University of Hull, where she graduated with an honours degree in American Studies. For the third year of the four year degree, she was able to call Baton Rouge home. Since then, Louisiana has claimed a large chunk of her heart, and remains a place she will always consider home.LSU was where she discovered FanFiction and currently writes (mainly) CSI:NY stories and a Rescue: Special Ops story. When not transcribing the stories of the angels and archangels, working, or DJing, she is at the beck and call of three cats – all of whom rank higher in the household than she does.
Author Links:

GIVEAWAY:
a Rafflecopter giveaway
at February 16, 2016