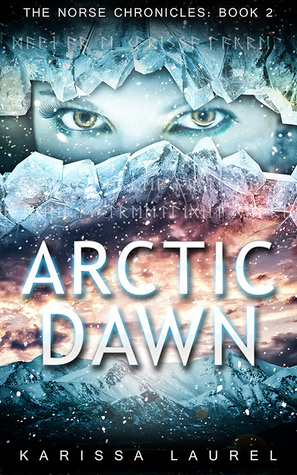 Arctic Dawn by Karissa Laurel
Series The Norse Chronicles Book 2
Genres: Fantasy, Mystery
Publication date: July 5th 2016
Publisher: Red Adept Publishing
Format: ebook, 276 pages
How I got it: I got the book from Karissa for a honest review.
Buy it: Amazon | Barnes & Noble
My rating: 4/5

Alone and exhausted after her month-long sojourn as a shooting star, Solina Mundy flees to southern California to lie low, recuperate, and plot a survival strategy. The one person she trusts to watch her back is her best friend, Skyla Ramirez. But Skyla has been missing for weeks.

The arrival of a dangerous stranger and the discovery of a legendary weapon of mass destruction forces Solina out of hiding and back into the fight for her life. Solina knows she won’t last long on her own. She must find out what happened to Skyla and unite her contentious allies if she hopes to track down this devastating weapon before her enemies use it to burn the world to ash.

The second book starts off with Solina being sort of lost and not knowing what really happened to her at the cabin.  She know needs to put her life back together while regaining her strength.  Solina doesn't know if she wants to jump right back into her old life since she isn't 100% sure exactly who she can trust.  Trust does become a big issue thought out the whole book.

I loved the relationship that we get to see develop between Solina and Thorin.  In the first book they had a very odd relationship I couldn't tell where it was actually going to go.  I am still unsure of where the relationship will end up, but I felt like we got a lot more insight into the Solina and Thorin.  Solina is having a hard time letting her feelings come to the surface for Thorin because she is afraid to get hurt.  I feel like in this book they both have up such high walls and they are slowly starting to come down.   We got to see how upset Solina is over Thorin's constant need to be by Baldur and help him.  Solina does seem to have strong feelings for Thorin, but also wants his undivided attention to fix the crazy predicament she is in.

I feel like I kind of want an entire book about Skyla.  I have a zillion questions about Skyla because I feel like her character can go in so many directions going forward.  I love the loyalty that Skyla shows even after finding out some shady stuff from the Aeria.  Skyla has a lot of potential to do great things she seems like a very strong character and a great friend to Solina.

The author did a great job with all the descriptions of the what was going on in the book.   I felt like I could imagine the scenes she was describing and felt like I was part of the orchard at one point.   All of the scenes and characters really came to life in Karissa's writing.

I really enjoyed all the twists and turns while reading this book.  So much more action happened in this book then the first one.  I did sort of lose track of what we were looking for because there would be another twist when I thought I figured out what was going on.  The book was a fast read for me due to the pace being full of action and wanting to figure out exactly what was going on.   Also, the ending of this book I did NOT see coming at all.  I can't wait to see where the author goes with the next book in the series.

I would suggest this as a weekend read. I got completely sucked into the story line again and couldn't put the book down! I had to know what was going to happen next and what was really going on!

I was received this book from Karissa Laurel for the purpose of providing an honest review. This does not affect my opinion of the book or the content of my review.

Karissa Laurel has tried her hand at many things -- cooking/catering, law, art -- but writing makes her the happiest.

She lives in North Carolina with her kid, husband, occasional in-law, and a hairy husky named Bonnie.