In a Colorado mountain town, a good girl kindergarten teacher propositions a sexy bad boy uncle of one of her students…It’s all part of ROMANCING THE WALLFLOWER by Michelle Major

About ROMANCING THE WALLFLOWER 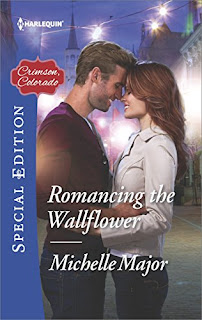 Dedicated kindergarten teacher Erin MacDonald isn't the type to make the first move on a man—especially gorgeous David McCay, her secret crush. But when a crisis involving one of her pupils offers a chance to help the pro baseballer turned local brewery owner, Erin goes way out of her comfort zone. So way out she makes a shocking suggestion!
David moved to the Colorado mountain town to look after his sister and her son. Now he's a stand-in parent to his nephew, trying to fight his attraction to Erin…who just propositioned him. David is nobody's hero. So why can't he convince the sweet, kindhearted beauty that she deserves better than him? Is it because they're the perfect imperfect match?

Add ROMANCING THE WALLFLOWER to your TBR pile on Goodreads!
CELEBRATE THE RELEASE WITH A GIVEAWAY!
Grand Prize: 1 Winner Will Each Receive a $25 Amazon Gift Card
Runner-Up: 3 Runner-Up Will Receive any Backlist Michelle Major Title (Digital Version Only)


Review:
This book follows Erin a kindergarten teacher who has had a crush on the brewmaster David for some time when the books begins.  Erin makes a bold move to help David with his nephew who happens to be in her class this year.

I really enjoyed reading this book.  The author does a great job creating the romance between Erin and David.  You can tell when you are reading that they are somewhat both interested in each other, but also dealing with other personal issues that stops them from jumping in all together.

Erin has a lot going on for her right now she is starting an afterschool program in town that she is trying to expand and get additional funding for, as well as being a kindergarten teacher.  I loved how the author went into details about how Erin feels that she is never enough and just average because of past events in her life.  The author did a great job talking about Erin’s family life as well as a past relationship that really put the idea in her head.

David was a great leading character.  He had a rough childhood that lead him to make some questionable decisions as an adult.  The author really goes a great job digging into all the issues as well as giving a lot of background on David so we can get a complete picture.  We can see how both characters have a few issues and believe they are damaged, but we can also see how they might work together.

The author does a great job creating the small town feeling with this book.  I love how a lot of the characters are all related somehow and know one another.

My one compliant would have to be I felt like the book didn’t really come to the climax the right way.  A big event happens towards the end that I didn’t really see coming because I didn’t realize how effected another character in the book was, we had only gotten a small glimpse before anything happened.  It came out of a little bit of left field for me in a cute romance so I wish we had more of a lead up to the event.

Michelle Major grew up in Ohio but dreamed of living in the mountains. Soon after graduating with a degree in Journalism, she pointed her car west and settled in Colorado. Her life and house are filled with one great husband, two beautiful kids, a few furry pets and several well-behaved reptiles. She’s grateful to have found her passion writing stories with happy endings. Michelle loves to hear from her readers at www.michellemajor.com.