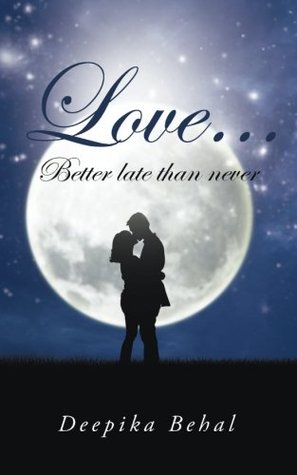 Love...Better Late Than Never by Deepika Behal
Genres: Young Adult Fiction, Romance
Publication date: August 13, 2015
Publisher:  PartridgeIndia
Format: ebook, 252 pages
How I got it: I won a copy from an Instagram contest!
Buy it: Amazon | Barnes & Noble
My rating: 4/5

The story follows Aadvi who is a young heiress to her father's business.  She works hard for his company and is trying to leave her mark on it.  She hasn't had much time for love in her life, but her parents want her to settle down.  Aadvi's family think they have found the perfect guy for her Akash who is a friend of the family.  Aadvi's grandfather on his death bed requests Akash to marry Aadvi.  The issue becomes Akash has already met the women of his dreams and breaks Aadvi's heart by saying he will not marry her.  Aadvi then moves to New York to try and forget Akash while also working hard at her father's company.

The first thing I love in this book is that Aadvi and Sean are so open with each other.  They both have had past life experiences and neither of them use that against the other one.  They put their pasts aside and want to just enjoy each others company.  Their relationship is so brutally honest it is refreshing.  They don't hold anything back from each other, which I think is an extremely important aspect of any relationship.

Another aspect of the book that I loved with Sean having respect for Aadvi.  He never once pushed her to make her uncomfortable.  He tried to spend a large amount of time with her, but never pushed being intimate.  Sean was extremely respectful and this is another thing in the book that I loved.  He was a true gentleman and to me that is harder and harder to see in today society.  They do exist, but finding a true gentleman is more challenging.

Also, to continue the items I loved in the book I really enjoyed Aadvi's parents.  They were supportive of her no matter what she decided.  They let her be herself and didn't push her to hard.  They were always looking out for their daughter and wanting the best for her.  In the end I think they got everything they wanted and Aadvi was beyond happy.   I feel like my parents are always supportive of the decisions that I make and it allows me to flourish.

The story moves along quickly so it is a fairly easy read. The book is written well so it is easy to understand and I don't think I have any lingering questions in the end.   The ending sums so much up and is the perfect way to end a love story!

I would like to hear more details about the characters and places they visit, but that is just the stuff I love in books.  I love to be able to imagine myself being part of the story and getting a feel for what the author felt the characters looked like.

I would suggest this book as nighttime read or even a weekend read.  It is a cute love story that will make you smile while reading! If you had a long day at work this is a great book to unwind with.

I won this book from an Instagram contest! I am so grateful that I got a chance to read this cute romance book. 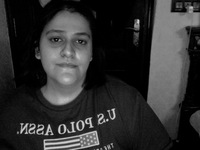 Deepika Behal, was born on 3rd January, 1984. Born and brought up in New Delhi, the part time businesswoman turned author is also an avid blogger, an enthusiastic traveler as well as handy with a paint brush. During her school and college, she was an asset to the teams she represented, namely the Quiz Club and Debate Society. An Alumni of Skyline Business School, she completed her Masters in International Business from National American University.

The writing bug got to her at a very early age when she began writing short stories and limericks for fun. This is her first attempt at writing a novel.