I choose this book since it was on my 2016 Reading Challenge as An epistolary novel and being on 1001 Books to Read Before You Die. I love to multi-task so I figured cross two books off my TBR list. The book follows Celie mostly as she is writing down diary entries addresses originally to God and than to Nettie her sister.  Towards the middle of the book we begin to learn about the letters that Nettie had written to Celie that Albert kept from her.

In my opinion the book focuses on Celie's life to really develop her character.  Celie was the oldest women of the children who her supposed mother had.  She had two children with her believed to be father before he sold her off to become Albert's wife.  Celie's main goal was to protect her younger sister Nettie from being exposed to all this tragedy.  Celie has to take care of Albert and his beastly children as her life's work. During this time Albert also raises his hand to Celie to keep her in line.  Several other characters come into play while Celie is married to Albert including Shug who is the women that Albert actually wanted to marry, but his father would not permit that marriage.

Nettie's life takes a different course after Celie is married to Albert.  She meets two people Samuel and Corrine and becomes a missionary.  The twist here is that Samuel and Corrine somehow came into possession of Celie's actual two children that were produced from her supposed father.  Nettie goes on a missionary mission to Africa where she learns a large amount about life and the world all together. 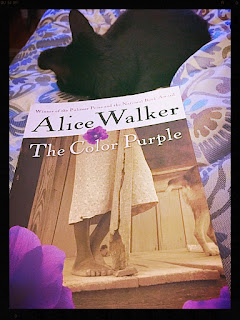 The book touches on a lot of major issues and has come into some criticism for strong use of language as well as violent sexual content.  The first being the treatment of African-American women during the time period.  Celie is sexually assaulted by her father when she is young and two children are produced.  There was no one she could speak up to, she barely knew what was even going on with her body in the beginning, which in my mind makes it much worse.  Than she is sold into a marriage with a husband who beats her and expects her to take care of everything with the household.  Celie has a hard upbringing, but eventually with the help of Shug finds her true identity and is able to face the harsh treatment head-on.  In the end of the book Celie has received her inheritance from her actual father and was given a store.  In the store she sells the pants that she sews, but also had an African-American employee which was something not seen in this time period.  I think this is the point that shows how much Celie has grown no matter what obstacle or hardship she faced she was able to overcome it with a strong support system.

I think the issue of race is touched on in several different ways in this book. First through Celie we can see the hardships that she faced not only as being African-American but also being a women during this time period.  She had no support group to go to or someone to speak up to.  She was sold off into a marriage by her own supposed father.  Celie didn't have many options and kept her mouth shut for many years since she didn't know what to do.  Once Shug came to the house she got to open up about many oppressed feelings that opened a whole different set of issues.   Nettie on the other hand had a different experience in Africa since they did now know of other races/cultures their belief system was different.  Listening to how slavery began with villages selling off their own people into that life it is something I never really knew.   From that one decision you can see how the massive downfall of a society began and that until this day is still not correct.

I think this is an excellent book that touches on subjects that are still relevant today.  It is a book to read when you have time to sit down and truly appreciate what the author is putting out there and also time to reflect afterwards on the book.