This book took me a little while to finish. I would read it for a bit and than put it down trying to figure out what exactly was going on. Jane Jenkins was a socialite who was convicted of murdering her own mother, but later acquitted 10 years later due to messed up DNA evidence. 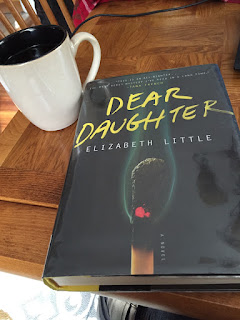 Jane goes looking for clues on who actually killed her mother and ends up in South Dakota in a town that experienced a gold rush years ago.  The town has an identical sister town on the other side of the mountain,  but is abandoned since no more gold is there.  Jane finds out that her mother was actually from the town and had a family there that she left behind after she became pregnant. The story unfolds based on small clues that Jane discovers while on her journey.

I think one of the main reasons I kept putting the book down was the character development and details of the scenery were weak in my opinion.  As a reader I want to be able to imagine exactly what the characters are going to look like the location/setting of the book looks like and I just didn't get that from this book.  I didn't feel like I knew what any of the characters really looked like there was maybe a few lines to give some basic descriptions.  The only place with the most details was the inn since it has elaborate furniture and the pool room in Stanton's house.  I feel like I can't imagine what these characters actually look like in my head since there was poor descriptions.   Don't get me wrong the story still moved without this information, but as a reader I had to use more imagination.

Since the story develops as Jane finds clues it keeps the reader questioning exactly what is really going on and who killed her mother.  Since the clues come in small bits it takes time for the reader to put everything together and keeps you wanting to find out what happens.  The suspense in my mind was what kept me reading. One other thing that helped me keep reading was the short chapters I was able to take breaks easier.

I did enjoy the snarky remarks that the author added into the novel  that Jane would make.  These were some of the cute quirks the book had that felt like seeing Jane as a character develop.  I also liked the flash backs that Jane would have that sort of showed her mother in another light, which lead me to feel like Jane switched sides of the fence and felt bad for her mother and regretted her not being around at the same time as still hating her.

I don't think I would recommend reading this book to anyone there are several other mystery novels that will keep your attention better and make you want to know what happens in the ending.  I would leave this for the end of your TBR pile for now.