My first book review of 2016! I have read a few books by Kurt Vonnegut before and I know I need to give my 100% attention when reading to make sure I don't miss any of his wit or topics.  In Slapstick the book is set in a future society in which the United States is no more.  The book is told through the eyes of Wilbur the previous and last President of the United States.  He tells the story of how his sister Eliza and him when they were children.  According to the narrator they were very ugly children with deformities.  He does mention this has to do with some inbreeding, but does not really expand upon this in the book.

The children are extremely intelligent only when they are close together.  They have the ability to be able to form one strong brain while together and during the novel come up with a best seller book as well as a new theory on gravity and how to save the United States by creating new families based on new middle names.   The naming system is focused on the most in the novel that during this awful time in the US the country was extremely poor and ran out of fuel.  The idea of people helping people out was something that did not occur in that society, so Wilbur's idea was give everyone new middle names that would in turn give them new extended families.  Everyone with the same middle name was now a new family and could support one another.   The families would hold meetings to discuss strategy in the future and also banded together.  It seems some people were opposed to the idea, but others excepted it and ran with the idea.   I see the point here that some people don't have large families or anyone they can spend time with, the naming system took away structured families and expanded it to the basic idea of people helping people. 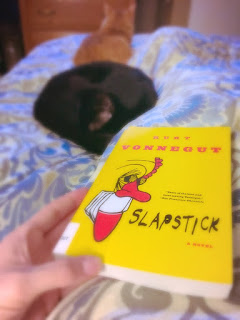 Another topic that is brought up several times is how the Chinese took over the world.  The US stopped inventing new items, which in turn stopped the country from being a super power.  The Chinese keep creating new technologies and where extremely secretive about it.  Wilbur was able to see that they learned how to shrink themselves down, travel with no form of vehicles, and maybe learn to control gravity.   In my mind I completely see where the author is coming from, we don't know much about China since it is a communist society and is not as forth coming as we are.  An example was when the Chinese's stock market had issues over the past year there was some speculation on actual  issue of why the decline, but it stabilized again. The Chinese stock market caused the world markets to go into chaos since they didn't know specifically what was going on.  In the book it is an exaggeration of how far the societies are apart, but it does have some basic idea that it does grasp at.

In the beginning of the book it discusses how people with large sums of money can get anything they want.  Wilbur and Eliza where born into a rich family and where supplied with their own staff and mansion to help them develop as children.  Their parents lived in a different state and came to visit only a few times a year.  I believe this is a comment on people with money in today's society as they try to squash problems by hiding them and since they have the resources they can do this.  Wilbur and Eliza's parents where embarrassed by their deformities and unintelligent so they hid them from the world and sort of put the problem out of their minds.  The narrator does mention they were well cared for, but also does mention that they didn't really know what love was since they didn't have a parent to watch over them and show them love.  This happens in society today all of the time today that parents sometimes are not as involved in children's upbringing and in turn later develop relationship issues.

The book is a fast read that gives you a new perspective on what could possibly happen in the future if society had drastic changes.  It gives you several topics to think long and hard about I only touched on a few above that I had some agreeing opinions on.  I would suggest reading it with a clear mind and time to read the whole book in a few sittings.

Quotes I Love:
"Love is where you find it.  I think it is foolish to go looking for it, and I think it can often by poisonous."