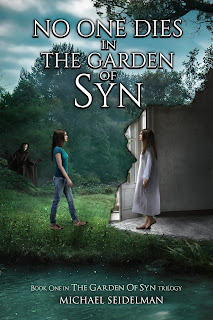 No One Dies in the Garden of Syn
by Michael Seidelman
Genre; YA Fantasy
Release Date: April 26th 2016

Synthia (Syn) Wade is a teenage girl who struggles with cystic fibrosis, an incurable life-threatening disease. One day she is pushed into a pond by an unseen figure and wakes up in a new world – a mysterious garden where illness and death don’t exist.Welcomed by the garden’s residents and now free of her symptoms, Syn decides to stay. But, before long, she realizes that this apparent utopia holds many dangers and dark secrets. Surrounding the garden is a fog that Syn is warned never to enter. She encounters bizarre creatures that defy reason. And always lurking in the shadows is a masked woman - a woman who may have a connection to the disappearance of Syn’s parents many years ago. A woman whom no one will speak of, but whom everyone fears.While No One Dies in the Garden of Syn, Syn will soon discover that some fates are worse than death.

Syn is a teenage girl who is struggling with cystic fibrosis (CF), which is a disease that affects the lungs.  Syn has a routine that she must complete each morning just to be able to make it through the day.  Every day of her life is a struggle due to a non-curable disease.  The doctors have told her she would most likely only live into her twenties.  I think the idea of knowing how much time you have left has really affected Syn as a person.  She doesn’t want to get close to many people.  Syn lives with her aunt who takes care of her after her parents disappeared when she was young.  She is then pushed into the pond in the garden and discovers a parallel universe where she is no longer sick and some crazy things are going on that just don’t add up.

I connected with Syn as a character, she was very well written.  The author did a great job describing her constant struggle that she has and what her symptoms are.  Syn has been suffering her whole life so she is constantly aware of her disease and condition.   It is hard for Syn to get close to people and she said she only has one true friend who is also very sick and going to not live long.  I think during the course of the book Syn discovers a lot about herself while being in the garden and really matures.  At the end of the book she is a much stronger individual and someone who is looking to make changes in her life for the better.

The story is a little slow moving to me, there are a lot of questions that pop up in Syn’s mind and my mind as a reader and it takes time for everything to unravel.  I feel like I wanted bits and pieces to fall into place a little sooner to grab my attention more there were parts I felt almost like it dragged along since I didn’t know what was going on or how to piece everything together into the puzzle.  Towards the end of the book the action really picks up and we get a lot of answers to all the questions that where pilling up for the reader.  The ending of the book is amazing!

The author did a great job with the descriptions of the book and making the reader feel like they were in the garden as well.  The fog portion of the book was a little confusing, but then made sense after explained.  The fog was also a little distrusting to me and a little dark in nature.  The story does take more of a dark turn towards the end and makes you question if you really know anyone.

I would suggest this as a nighttime read; it was easy to pick up and put down.  The story was easy to follow along.

I received a copy of this book from YA Bound Book Tours for an honest review.  This does not affect my opinion of the book.

My name is Michael Seidelman.  I was born in Vancouver, BC Canada where I continue to reside. When I was growing up, my passions were reading, watching movies, nature and creative writing. Not much has changed since then. In high school when I had an opportunity to write short stories in class, I relished reading them out loud to my classmates who would gasp at the unexpected twists and applaud when I was done. I took several creative writing classes and have continued writing over the years while working in Interactive Marketing.

About two years ago, I decided to take some time off to focus on my writing and work on a Young Adult trilogy. The first book in The Garden of Syn series – No One Dies in the Garden of Syn – will be released on April 26th. Meanwhile, I am working hard on the second and third books in the series.


Getting up every morning and sitting down to create new characters and bring new worlds to life is the most fulfilling job I have ever had. Beyond the trilogy, I have many ideas plotted out and I look forward to sharing them all with the world!
Author Links: