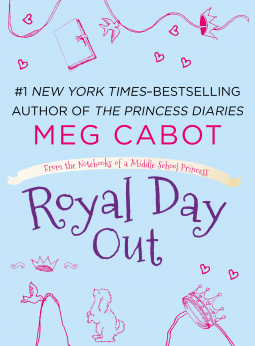 Royal Day Out: A From the Notebooks for a Middle School Princess e-short by Meg Cabot
Series From The Notebooks of a Middle School Princess #1.5
Genres: Short Story, Middle Grade
Publication date: May 10th, 2016
Publisher: Feiwel & Friends
Format: ebook, 33 pages
How I got it: Netgalley Publisher Approval
Buy it: Amazon | Barnes & Noble
My rating: 4/5

Olivia Grace Clarisse Mignonette Harrison never thought that being a real life PRINCESS OF GENOVIA could ever be boring, but with all of the new vans and paparazzi staked out in front of the palace, the whole family has been on lockdown for weeks. So when Grandmere suggests a shopping trip to buy a small present for Princess Mia, Olivia jumps at the chance—especially since the shopping trip comes with the promise of lunch at the Royal Genovian Yacht Club (makers of the best ice cream sundae in the world)! Surely nothing could go wrong with such a simple day out, could it?


I haven't read a Meg Cabot book in a little while, but do love her writing style.  The stories are always super cute and a light-hearted read!

This book follows Olivia and her grandmother on a day out around town.  Olivia is new to being a Princess of Genovia and still learning how to be a princess.  Grandmere has been a princess in Genovia for a long time is set in her own ways.  Olivia really looks up to her Grandmere and does enjoy a day out.  They are trying to find a gift for her sister Mia and also going to the Genovian Yacht Club for lunch.  Olivia loves the Yacht Club because they always bring her exactly what she loves!

This book is a super short read and very cute! There is a little bit of action and some comedy, which makes it a fun read.  I haven't read the previous books before this, but you don't need to read them to understand what is going on.

Olivia is a super cute character that the author developed who is trying to learn her role as a new princess.  She is easy to relate to because sometimes children are just trying to learn there way around.  Also, Olivia is very respectful of Grandmere, which is refreshing to read.

I would suggest this as a quick read when you really need an escape or a change up between your reading.  It didn't take long to read and it was funny!

I was received this book from the Netgalley for the purpose of providing an honest review. This does not affect my opinion of the book or the content of my review.

Meg Cabot was born on February 1, 1967, during the Chinese astrological year of the Fire Horse, a notoriously unlucky sign. Fortunately she grew up in Bloomington, Indiana, where few people were aware of the stigma of being a fire horse -- at least until Meg became a teenager, when she flunked freshman Algebra twice, then decided to cut her own bangs. After six years as an undergrad at Indiana University, Meg moved to New York City (in the middle of a sanitation worker strike) to pursue a career as an illustrator, at which she failed miserably, forcing her to turn to her favorite hobby--writing novels--for emotional succor. She worked various jobs to pay the rent, including a decade-long stint as the assistant manager of a 700 bed freshmen dormitory at NYU, a position she still occasionally misses.

She is now the author of nearly fifty books for both adults and teens, selling fifteen million copies worldwide, many of which have been #1 New York Times bestsellers, most notably The Princess Diaries series, which is currently being published in over 38 countries, and was made into two hit movies by Disney. In addition, Meg wrote the Mediator and 1-800-Where-R-You? series (on which the television series, Missing, was based), two All-American Girl books, Teen Idol, Avalon High, How to Be Popular, Pants on Fire, Jinx, a series of novels written entirely in email format (Boy Next Door, Boy Meets Girl, and Every Boy's Got One), a mystery series (Size 12 Is Not Fat/ Size 14 Is Not Fat Either/Big Boned), and a chick-lit series called Queen of Babble.