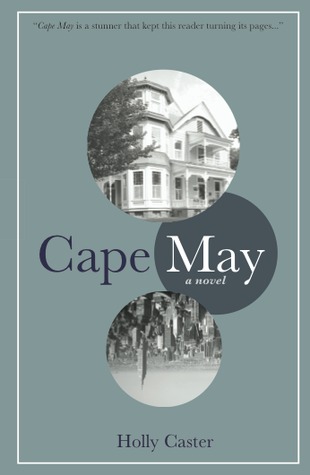 Cape May by Holly Caster
Genres:  Fiction, Romance
Publication date: July 28, 2015
Publisher: TDC Publishing
Format: paperback, 310 pages
How I got it: Holly Caster was nice enough to send me a copy!
Buy it: Amazon | Barnes & Noble
My rating: 4/5

New Yorker Joanna Matthews is rapidly approaching 60 and desperate for a change. The last remotely daring thing she did—jumping into an unconventional marriage with her best friend Brian—happened 20 years ago. Now, their life’s comfortable, if routine. Joanna craves more and begins pursuing her long-deferred dream: owning and running a bed & breakfast. She’s captivated by Cape May, New Jersey, America's Oldest Seaside Resort. On the bus south, she meets a novelist, and is thunderstruck when she falls passionately in love for the first time. How will her late awakening affect the future and her three-decade relationship with Brian?


This book follows Joanna who is trying to make a big life change by quitting her job to run a Bed and Breakfast.  Joanna had looked at a few towns before Cape May, but didn't find anything she loved.  Cape May captivated Joanna right from the beginning when she got off the bus.  On the bus Joanna meets a man named Michael who has spent a lot of time in Cape May and at one point lived in the town.

Things I loved in book started with the setting of Cape May.  I have been to Cape May a few times and it is exactly as described in the book.  It is rare for a town to be setup similar to how it was in the past, but Cape May hold true to that.  There are a large amount of Bed and Breakfasts in operation in old Victorian houses.   It was great to see that some of the details of the area where captured in the book.  I also really enjoyed Joanna referencing back to Victorian times when she was trying to picture what the town looked like years ago because that is really easy to image when you are in Cape May.

The story line for the book was very well written and easy to follow along.  I love the concept of getting older in society and the pressures that people put upon themselves.  Joanna can only see that she is older and getting more and more wrinkly.  She also mentions how at her current job younger workers get the work done quicker than she can do it.  I think these are great points the author brings up the struggles of aging in society today since youth is shown all over the media and valued highly in society.  By the end Joanna works out that getting older is not necessarily a bad thing and has a new attitude.

The author did a great job showing both Joanna and Michael's point of view by switching the point of view of how the story was told.  I would have love to get a little insight into Brian during the book since he was also effected in the book.  I didn't love Brian I think because I couldn't get his side of the story.  I felt like in the beginning he wasn't putting that much effort into Joanna's wanting to start a new life by running a Bed and Breakfast.  I couldn't imagine trying to make those kind of financial decisions and uprooting a life without having my spouse present.   Brian seemed very set in his ways and standoffish so it was hard for me to have compassion for him during the book and I think if the reader got a slight look into Brian I might have felt something more towards him.

I would suggest this as a night time read it was easy to follow along with and lose yourself in the book.  The characters, plot and descriptions keep the book moving along and is easy to get sucked in.  I love books that after a long day at work I can come home and relax my mind.  Although I can also see this as a vacation beach time read, it would be the perfect companion for your beach bag!

I was received this from the author Holly Caster for the purpose of providing an honest review. This does not affect my opinion of the book or the content of my review.

Holly Caster writes an entertainment column for The Nyack Villager, has written dozens of articles for employee assistance websites, and is the Editor of two journals devoted to pain management education. She is hard at work on her next novel Anne/Island/Whales. She lives in the lower Hudson Valley Region with her playwright husband Tom Dudzick and their two cats Alfie and Bill.

Holly knew in 9th grade she wanted to be a writer after receiving an A+ on a paper about 1930’s actress Irene Dunne. That early triumphant high hooked her, and she’s been writing ever since. She grew up in an apartment full of books, with a mother who read more than cooked, a father who wrote for a living, and a sister who grew up to write for a living. She married a successful playwright, and gave birth to two children who grew up and are writers. Her earliest memories involve Dick & Jane, red and blue fish, magical wardrobes, and Captain Nemo’s submarine. She watched stories in her head and eventually wrote them down. Holly spends too much time watching films, from the 1930s through the present, would rather be in an art museum than almost anywhere, and would consider her perfect day spent in a European café with coffee and a book, resting her feet after being dazzled by Kandinski. She writes in her almost nonexistent free time, and considers herself blessed to work with words, whether her own or someone else’s.