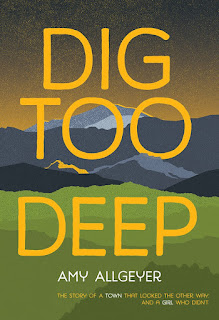 With her mother facing prison time for a violent political protest, seventeen-year-old Liberty Briscoe has no choice but to leave her Washington, DC, apartment and take a bus to Ebbottsville, Kentucky, to live with her granny. There she can finish high school and put some distance between herself and her mother-- her 'former' mother, as she calls her. But Ebbottsville isn't the same as Liberty remembers, and it's not just because the top of Tanner's Peak has been blown away to mine for coal. Half the county is out of work, an awful lot of people in town seem to be sick, and the tap water is bright orange--the same water that officials claim is safe to drink. When Granny's lingering cold turns out to be something much worse, Liberty is convinced the mine is to blame, and starts an investigation that quickly plunges her into a world of secrets, lies, threats, and danger. Liberty isn't deterred by any of it, but as all her searches turn into dead ends, she comes to a difficult decision: turn to violence like her former mother or give up her quest for good.

After I finished reading this book all I thought was I could never live near a mine and all I wanted to do was find a cause close to my heart and become an advocate.   I feel like this book is a very inspirational read and one that would be great for young adults.

I loved Liberty from the beginning you could tell she was really upset with her mother and her current situation.  Liberty took to finding out what was wrong with her grandmother and began to focus on the issues the mine is causing to the town.  Liberty was a strong individual who took a large amount of responsibility at a young age.  It seems since her mother was absent she was able to basically fend for herself and budget.  Liberty definitely became even stronger in my eyes towards the end of the book for the way she handled not only the mine situation, but how she handled her mother’s situation as well.

The story was very fast paced and an easy read.  The author does a great job with filling in the background information on the dangerous of mines.  Also, the author does an excellent job with the descriptions of the mine now versus back in the day.  All I kept thinking while reading was that people where accepting orange water to be ok and in my mind it was neon orange color.  One thing I absolutely love about books is falling in love with a character and that is what happened to me and Liberty.  I was 100% cheering on Liberty to shut down the mine during the entire book.  She had to succeed since she was putting so much effort in to trying to make things better.

Other topics I think the book did a great job touching on where the idea of corruption on the local level.  Liberty witnessed firsthand what can happen in a small town.  The town was depending on the jobs in the mine and that influenced the local town committee.   The author did a great job showing what can happen at the local level in politics and also on a bigger level with people influencing others with money and jobs.

I would suggest this as more of a weekend read.  I felt like I got completely sucked in and needed to know what was going to happen with the mine.

I received a copy of this book from The Fantastic Flying Book Club for the reason of providing an honest review.  This does not affect my opinion of the book.

Follow the Dig Too Deep by Amy Allgeyer Blog Tour and don't miss anything! Click on the banner to see the tour schedule. 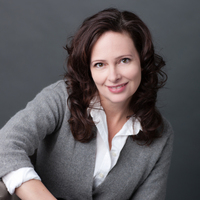 The youngest of seven kids, Amy has been writing stories since she first learned to make her letters face the right way. Her work has appeared in Family Fun, A Fly in Amber and Stories for Children. As an architect, she spends her days restoring hundred-year-old homes in Boise where she lives with her son, a feral house cat, and a fake owl named Alan. She hates chocolate, but loves vegetables. She also loves travelling to foreign lands and the smell of honeysuckle on humid Southern nights.

Amy is represented by the lovely and amazing Danielle Chiotti of Upstart Crow Literary. 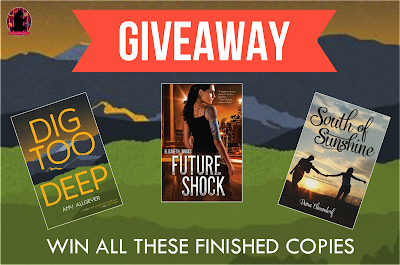 US ONLY | Rules and conditions in the rafflecopter